So much for a simple life...

Our youngest daughter has always wanted a dog. As long as I can remember. Or maybe she wanted a cat at some point, but when she realized that you can't get hypo-allergenic cats, she switched to wanting a dog because it was an option she was more likely to succeed at attaining.

We had many reasons NOT to get a dog. An allergic auntie, our efforts to raise our own food (without a dog digging it up), a budgie who ran the house, a desire to keep things simple, and Julia's own tendencies towards allergy symptoms. But now that she's older, her old symptoms seem to be dissipating, her sisters are playing with her less, and she's been pushing for a puppy more. She's proved that she's willing to pick up after a dog (she's pooper-scooped for our friends' dog on a walk), she's been doing a lot of research into different breeds, and she's even gone through allergy tests, though she was terrified of that whole thing. When our friends' dog came for a visit and totally ignored Pebbles the Budgie, Julia decided that our argument against having a dog because we have a budgie no longer holds. She's determined.

For the last few months, dogs have been discussed daily. When the school put on a production of The Wiz in December, and the vice principal's dog played Toto, Julia took care of him one evening between his appearances on stage, and fell head over heels in love. "I want a dog just like him," she decided on the spot. She got the details about the breeder from Mme Vice Principal, and sent emails to find out about puppy availability.

Julia has been reading Dog Training for Dummies and taking copious notes, and has finally convinced her family (for the most part) that a dog would be a good addition to the family. We've paid two visits to the breeder, and on Saturday, Julia picked her little animal. We also bought her some puppy paraphernalia for her lucky birthday next week. Little nameless pooch (Julia figures we have to bring him home and see his personality before she'll know what to call him) is just four weeks old, so we won't actually collect him until Spring Break. Then she'll have to put her 'dog training for dummies' into practice... as will we all. 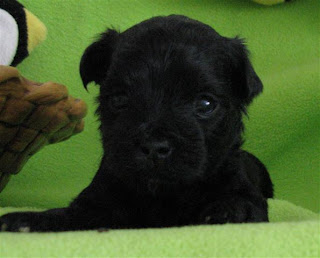 Life is going to change. Besides figuring out how to house train a tiny pooch, we'll have to doggie-proof the house, find a vet, figure out grooming, get up at hours to which we're unaccustomed, and learn to understand a non-verbal family member's cues. It seems almost as overwhelming as having a baby, but without the worries of labour.

So much for living simply... at least until we get into a routine. If my moodling becomes intermittent in the next few months, the dog may be to blame. If you like images of small black dogs, watch this space -- I'm sure our puppy will be making a few appearances now and again. And if you have any tips on how to welcome a new pet, I'm all ears!
Posted by Maria K. at 11:11 AM

No advice just giggles and excitement for your new adventure:)