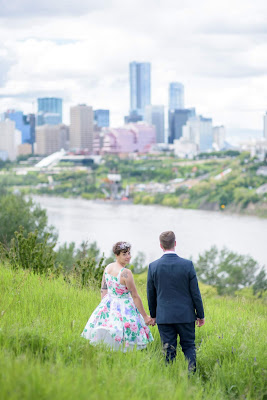 Our eldest daughter's wedding took place at the end of June, and the celebration of her marriage to her chosen partner was a delight from start to finish. Not only did it completely reflect Landon and Christina and their love for each other, their families, and their friends, but it was pretty waste-less and sustainable -- right down to the fine details.

So how did they pull it off? Keep in mind that they're very progressive young people who don't necessarily hold to the ways traditional weddings are celebrated. They did at least 10 different things that not all couples consider when it comes to having a simpler, more earth-friendly wedding.

When Christina proposed to Landon two years prior to the wedding, we knew immediately that it wasn't going to be a conventional wedding. She had 1) two simple silver rings fashioned by a silversmith friend that she used to propose, and they also doubled as their wedding rings. So on the wedding day, their little "ring bear" (complete with a bear-eared hat) delivered the same two rings into their hands to put on each others' fingers as a sign of their permanent commitment.

2) Their wedding invitations were all online (except for a few mailed to less computer-savvy folks who probably preferred paper copies). They put up a nice little website at theKnot.com so guests could read up on all the details of the day.

3) Christina said "No to the Dress" because she had a perfectly lovely one in her closet already. Who says a wedding dress has to be long and pure white, and worn only once? My mom found a crinoline in her own closet and did a few alterations for her granddaughter. It turned out to be the perfect dress for our girl, a simple white cotton print with splashes of lilacs, peonies and roses. Christina didn't even buy wedding shoes, but went barefoot for most of the day and kept her Birkenstocks close at hand for longer, rougher distances. Her dress was the "old" (she's had it since Grade Twelve), a white wrap I crocheted for her was the "new," my own wedding earrings were the "borrowed," and she painted her toenails "blue."

The bride and her attendants all wore Baby's Breath in their hair, but that was the only matchy-matchy thing about them. 4) The wedding party were invited to wear their own comfortable clothing with pink, green or purple accents from their own wardrobes, things that they can also wear for other occasions. The groom picked out a sharp new suit that he will wear in the future, and his attendants joined him on a little shopping trip to buy new ties that all worked well together. The only clothes specifically "made" for the wedding were the bride's crocheted wrap and two bow ties my mom made from fabric left over from the wedding dress alterations, a surprise worn by the bride's grandfather and great uncle. Seeing those two in their floral bow ties saved our emotional bacon as Christina and I giggled our way up the aisle! (I didn't cry until the vows. They were just beautiful!) 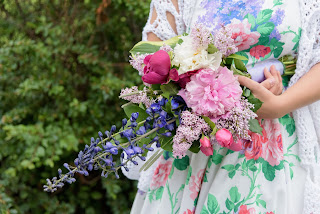 5) Bouquets came from local gardens -- mine, my sisters, and MCR friends'. A rural friend of Christina's had some late-blooming lilacs that we kept in my cold storage room for three days prior to the wedding (heavenly fragrance in there!), and one of the bride's attendants picked some wild grasses (from the nearest ravine) that found their way into every unique bouquet put together by florist friend, Annette. Because the bouquets would have wilted if left too long out of water, they were kept in vases to decorate the hall for the evening -- and our back doorstep for the gift opening the next day. Once they wilted, they found their way into my compost bin. 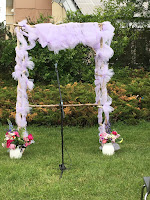 One of the things Landon and Christina insisted upon was that 6) no wedding decorations be sent to the landfill after the wedding. Landon and his dad, Greg, built an outdoorsy wedding arch from birch harvested from the family acreage, and it was decorated with lengths of tulle salvaged from an event at the Stony Plain Library. It now sits over a bench at the family firepit. 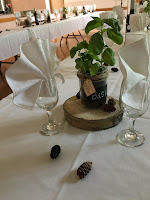 There was enough re-purposed tulle that we hung it across the front of the community league hall with some borrowed fairy lights to create a lovely ambiance for the evening. Landon's mom, Sandy, got to work re-purposing jam jars as herb planters that wedding guests could take home as gifts, and grew little pots of basil, oregano, thyme and parsley to go into them. They were set on cut "plates" of downed tree trunks also from the acreage, later to be used for firewood. Tiny fairy light strings borrowed from a friend were put into jam jars decorated with jute bows and used in the place of candles on the tables, and tiny (compost-able) pine cones gathered by someone on the decorating committee were strategically placed on the tables to add a little more outdoor elegance.

7) There were no stretch limos or parades of wedding cars emitting fossil fuels. The wedding was a twenty minute walk from the bride's home, and photos were taken on the hills near the Cloverdale Community League hall, where the banquet was held (it takes its electricity from solar panels). Driving was pretty much kept to a minimum, though the parents of the groom and some guests had further distances to travel.

8) The weekend's meals were almost waste-less. For the rehearsal party and day after the wedding, I borrowed MCR Suzanne Dennis' party boxes. Su had enough colourful plates, cloth napkins, cutlery, and other useful items that we didn't have to use a single paper plate or serviette, just washed it all up and used it again. For the wedding banquet, Christina and Landon rented dinnerware and linens for 120 from Special Event Rentals, which doesn't expect everything to be washed before it's returned. Unfortunately, the plates came in packs of ten, wrapped in plastic shrink wrap, but that's minimal waste when you compare it to the amount of single use paper plates and plastic cups/cutlery that weren't thrown out in the end. We recycled pizza boxes and bottles, as should be the case. Leftover food was eaten by friends and family in the week after the wedding (we just finished eating the cookie bar cookies because Christina and Landon didn't want wedding cake), the unopened booze was returned to the liquor store, and some pop was passed on to Christina's cousin for his wedding two weeks later. 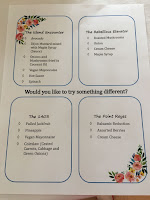 Landon and Christina's friend, Alexis Hillyard, (of Stump Kitchen -- check out her videos!!) catered 9) an amazing, lower carbon vegetarian meal of pancakes with both sweet and savoury toppings. Because Landon and Christina are vegetarians, they didn't want animals to be harmed in the making of their banquet. Some guests were a bit skeptical about a pancake supper for a wedding, but Alexis really pulled it off, and I'm thinking about trying some of her savoury recipes for myself. Who'd have thunk putting roasted mushrooms and onions, basil cream cheese, avocados, pineapple or pulled jack fruit on a pancake would taste so good? There were four different recipes to try (named after different aspects of the newlyweds' life together), and from all reports, each one was delicious. For the less adventurous, pancakes with fruits and syrups were also available.

Most fun of all was the evening's entertainment. After supper and speeches, the happy couple and various friends with whom they form several different bands got up to sing and dance with the crowd, playing 3-song live sets, interspersed with dance music. I will never forget Landon, Christina, and Landon's brother and best man, Matt, performing A Thousand Miles (Vanessa Carlton) with the crowd singing along at the top of their lungs. We danced to music of all descriptions, and it's safe to say that a good time was had by all.

The thing about simple and sustainable living is that it's not exactly convenient. 10. The couple and their family and friends worked pretty hard to make the wedding celebration a sustainable one that we'll never forget, and because "many hands make light work," it came off with hardly a hitch. There's something extra special about pulling together as we did for two people who are so special to us -- a real sense of community formed at the event. Resources were conserved rather than wasted, the weather co-operated (the sun even came out as the couple shared the heart-felt vows they had written themselves), the ceremony was both delightful and beautiful, the supper was delicious, family and friends had a wonderful time together, and our newlyweds have plenty of memories to cherish from their special day. And me, I was simply awash in mother-love for both of them!

Christina and Landon celebrated their marriage in their own inimitable way, without stressing their bank accounts or their planet. Of their creativity, sense of fun, and desire to do things as simply and sustain-ably as a wedding for 120 can be, we are prouder than parents have any right to be. And we don't doubt for a minute that, in working together to create such a beautiful day, they proved themselves capable of facing the logistical and emotional challenges that marriage brings, too. With friends and family to back them up, we're sure their life together will be made of love, wonder, sustainability, goodness, joy and beauty! We're so proud of you both; God bless your life together!
Posted by Maria K. at 9:58 PM