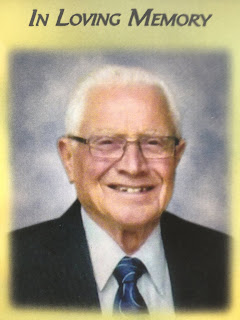 When you become friends with an 88-year-old neighbour, it's probably wise to tell your heart that the friendship won't last as long as you'd like.

My dear friend, Ralph, died recently, and my heart is broken. We became friends in September six years ago, and I am very grateful for those six years. I continue to be grateful for his wife, Lidia, who is struggling with widowhood after 65 years of marriage.

Ralph's actual name was Raffaele, so much more poetic than I realized in all the time I knew him. And what a delight he was to me. The day that we first met under his plum trees, I thought him to be a bit gruff and unsmiling, but that first impression was incorrect. Within minutes, he had invited me into his home for coffee and Italian cookies, and we gardeners became fast friends, sharing produce and swapping garden stories. Lidia taught me how to make minestrone with squash blossoms, and makes me laugh when she says, "I speak English like minestrone!" All mixed-up, in otherwords. I fell in love with these two neighbours, no question!

It wasn't long before I kept an eye out for them every time I walked the dog past their house, and I would stop to say hello if Ralph was in his garden or greenhouse. I didn't really see him and Lidia very much over the winters. It's only been the last two years or so that I've made a point to go and visit them more frequently, including through the cold, dark, non-gardening seasons.

This year, I've tried to visit at least once a week, mainly because if I didn't, Ralph would come looking for me to be sure that I was okay. During planting time this past spring, I missed a week or two and was surprised when I arrived home from running some errands to find him standing in the middle of my backyard, saying, "It's been a longa time since you came over."

That's when I knew that I wasn't the nuisance neighbour who showed up and drank his coffee in the mornings, but a beloved friend who was missed if she didn't turn up on a regular basis. It made my day! But I was also very aware that it was a major effort for him to come looking for me, so I started letting him and Lidia know about my schedule and when to expect my next visit. I didn't want to be the reason for him to have any sort of accident, vehicular or otherwise.

One morning in August, on my way past his garden with the dog, I noticed him sitting rather listlessly on his back patio, and when I climbed the steps to say hello, he barely cracked a smile. Uh-oh. He mentioned that he was having pain in his left abdominal area, and he winced a few times as I sat with him and he told me about the tests he'd gone for.

The following week, when I came to the door, Lidia answered. I asked how she was, and she said, "Bad." We had a whispered conversation right there about liver cancer and how radiation or chemo were out of the question for a 94-year-old man. But Ralph was in fairly good spirits -- the doctor had given him some painkillers, and he was only taking them when it hurt too much. He was feeling okay, he said. Lidia complained that he wasn't eating her cooking, but he waved her off, saying he wasn't hungry, so I ate lunch with them that day to take some of Lidia's attention off his lack of appetite.

For the past few weeks, I was surprised each time I visited by how much Ralph had declined. The man who bragged about partying at his grandson's wedding until 1 a.m. was fading away. He had always impressed me with his robustness for a man in his nineties, but now his lack of appetite was clearly taking its toll. My last visit with him, he sat slumped in his kitchen chair, and he looked very pale. It was the day of his brother-in-law's funeral, and he wasn't feeling up to going. So we sat and visited and drank Lidia's espresso, but Ralph didn't have much to say, other than to tell me that he'd finally met his first great grandchild, named for him.

I was chatting with a visiting nephew (Ralph and Lidia often had visitors) when Ralph announced that he wasn't feeling well. Lidia and I watched him closely and did what we could to make him more comfortable. She kept insisting that he drink some orange juice, but I suggested that if he wasn't feeling good, something acidic might not be the best idea. She plopped a cool cloth on his forehead, but looked like she was going to teeter over herself, so I encouraged her to sit down, and took the cloth to wipe his dear old face.

Ralph's colour returned, and I laid the cloth over his forehead, kissed his cheek and told him that I had to catch a bus to our local Climate Strike, but that I'd see him again soon. That evening, Lee and I stopped by with some gingerale for him, but he was already in bed, so we had a little visit with Lidia, her son and his wife.

Monday morning when I returned from walking the dog, there was a message on my answering machine. Ralph's son called to let me know that he had died on Sunday afternoon. I had a little cry, then walked over to see Lidia, and we cried all over again. And I imagine we will for a while.

I miss my neighbour -- his quiet and gentle way, the way a smile would slide across his face when I teased him about being a magic gardener, his laugh when I told him that his lavatera plant was a tree compared to mine.

Thank you, Ralph, for six years of friendship, gardening companionship, and generous hospitality. Thank you for the tomato and squash plants and seeds you shared with me. Thank you for all our little garden visits. I would have enjoyed more time with you, but I am grateful for the precious memories you've left me.