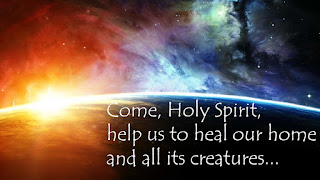 O God,
you tell us
that we are your servants
and your glory is in us.

You ask us to bring all the world
back to you
so that everything and everyone
can be gathered,
not in protest or strife,
but in your loving arms.

Your call is our honour
and you are our strength.

And you tell us
that our task
is not only to raise up human tribes
and survivors of our present challenges.

No,
your role for us is greater yet.

We are to be your light
for all of creation,
to defend and support
all you have made
so that your love
can reach every creature
even to the ends of the earth.

You honour us
and challenge us.
Help us to meet your challenge.

This week we are looking at "Cultural Ecology," which is Section II of Chapter Four of Pope Francis' encyclical, Laudato Si: On Care for Our Common Home. It can be found by clicking here and scrolling down to paragraphs 143-146.

The words of this weekend's reading from the Book of Isaiah fit well with the Pope's words about cultural ecology. In the reading, Isaiah is called, as are we all, to be servants of God's creation and one another. The only way we can be light to the nations and hope for our planet is if we remember that we are God's action on earth, called to bring all of creation to God's salvation as we reach for that salvation ourselves!

As I began reading this section, I had to stop and say, "what the heck is patrimony?" The word refers to an inheritance received from one's father or a male ancestor. For those who understand God as beyond gender stereotypes, inheritance or heritage is a better word. Archaic language aside, this section explains that when our ecological heritage is under threat, so is our cultural heritage. As is noted in paragraph 143, "Culture is more than what we have inherited from the past; it is also, and above all, a living, dynamic and participatory present reality, which cannot be excluded as we rethink the relationship of human beings and the environment."

And what is it that endangers our cultural heritage? I would point to the way our media/marketers plant artificial desires in the hearts of so many people -- to keep up with the Joneses, to be like everyone else rather than acknowledging that we are all unique and beautiful children of God who don't have to look and dress like the flavour-of-the-month celebrities in any given country. That's only one example... Pope Francis and friends say in paragraph 144 that


There is a need to respect the rights of peoples and cultures, and to appreciate that the development of a social group presupposes an historical process which takes place within a cultural context and demands the constant and active involvement of local people from within their proper culture. Nor can the notion of quality of life be imposed from without, for quality of life must be understood from within the world of symbols and customs proper to each group.

As I see it, the problem is that too often in human history, cultures that saw themselves as "more advanced" or that were wealthier or more scientifically educated (read: "superior") imposed themselves upon unsuspecting original populations with disastrous results! I'm thinking of French explorers who brought smallpox and alcohol to the Indigenous peoples of Canada without appreciating the gifts they offered -- a deep understanding of the land and of creation. Or of well-meaning scientists who tried to control "pest populations" by introducing a predator species that became more invasive and devastating than the original pest. Paragraph 145 states, "The imposition of a dominant lifestyle linked to a single form of production can be just as harmful as the altering of ecosystems."

Paragraph 146 contains what I see as the critically important lines of this entire section -- "...it is essential to show special care for indigenous communities and their cultural traditions. They are not merely one minority among others, but should be the principal dialogue partners, especially when large projects affecting their land are proposed..." Their land, and their livelihood, which is often very connected to all creatures living on the land with them.

Of course, this is not how our world operates. We saw that just this week as our Supreme Court rejected B.C.'s appeal of the Trans Mountain Pipeline, saying that there was enough consultation with involved communities. In the meantime, the Wet'suwet'en community is fighting the Coastal GasLink with a fair bit of media attention, with protests supporting them across the country.

And there are many other mining operations, pipelines, agricultural projects, hydroelectric dams, water bottling plants -- to name just a few -- that have been established without appropriate consultation or studies with/of the people and other species who live on and take their livelihood from the lands where such projects have been planted. There's a heartbreaking video in our Royal Alberta Museum about the Bighorn Dam built in 1972 with no consultation with the Stony Nakoda who lived in that valley, and whose ancestors' graves are now under the reservoir. In our not so distant past, some cultures have completely disappeared due to the ignorance of other "invasive cultures," and there are, unfortunately, too many examples of similar things going on at present.

I worry for my many Indigenous sisters and brothers in the news and what will happen to them if there are large pipeline leaks, as well as the caribou herds whose populations have diminished because construction of mega projects and different jurisdictions' forestry practices have disrupted their migration paths and natural life cycles.

Pope Francis and Laudato Si call us to stop acting like superior invaders who impose upon creation, upon cultures, upon creatures, and become co-operators with who and what is already present instead. To be light to the nations rather than ignore these situations!

If you follow my moodlings at all, you'll know that I particularly like the example given by Development and Peace, a Canadian organization, part of Caritas International, which has learned to listen to people "on the ground" when it comes to offering development assistance. I've heard of too many organizations that parachute people into communities in the developing world to build orphanages or start programs without a real understanding of what is needed. Wouldn't it be better to enter into dialogue and to cooperate with other communities? To respect their wisdom and protect their way of life with a grassroots cultural ecological model?


In the week ahead, I would invite us all to consider the culture in which we live, and give some thought to how we can support struggling cultures -- both human and non-human -- without imposing our needs, expectations or solutions upon them.

They don't need invaders, but I'm sure they can use more friends and supporters. Maybe it's time to research organizations in your neck of the woods that support grassroots cultural ecology?