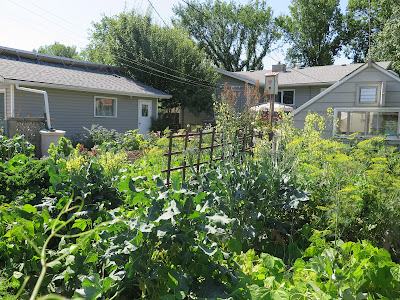 You know it's been a busy summer
when there haven't been regular garden updates in my moodlings.
So to make up for it, here's my single 2019 garden report,
posted on a rainy Friday morning with pictures from earlier in the week. 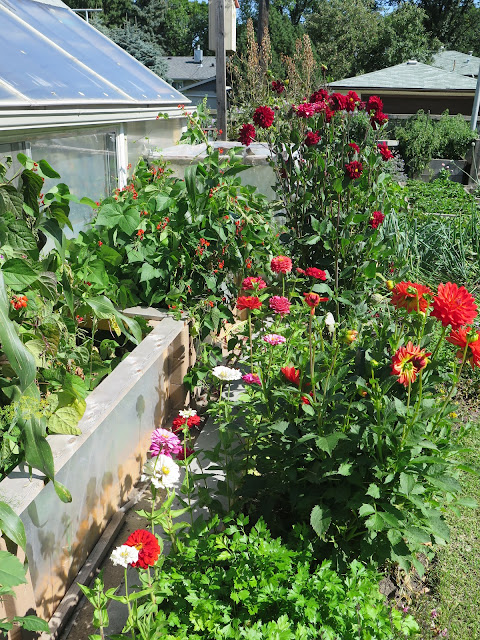 2019 has definitely been a year for flowers.
I've never had dahlias like these, or sweetpeas.
Our "sunrise" rosebush hasn't stopped blooming!
It seems they all like cool and rainy weather,
and we've had no shortage of either in 2019. 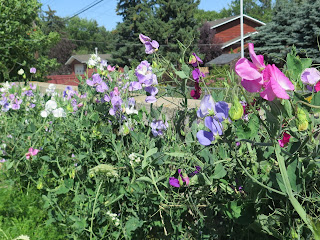 It also helped that the feet of our sweetpeas
are shaded by carrots that seem to have done very well this year.

Unfortunately, 2019 has also been the year of slugs and voles. 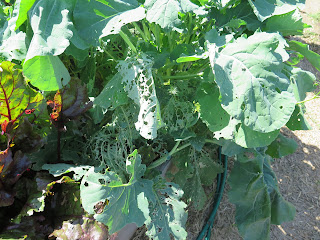 My poor kohlrabi and some beets look like lace,
and between the slugs and the sparrows,
our peas didn't amount to more than two feeds (out of 30 sq ft).
The lettuces and chard went to pieces, pretty much.
I'm afraid that next year I'll have to put up a scarecrow
and spend my beer on the slugs,
much as I'd rather drink it myself!
(They'll die very happy!) 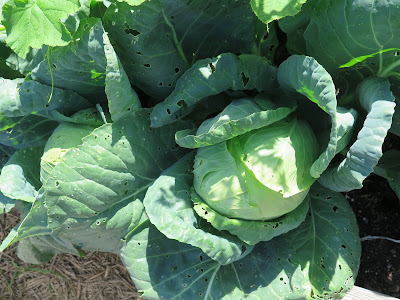 I had a dozen cabbages to start with,
but voles ate out the roots of five of them
before I understood what was going on.
Thanks to serious vigilance with BTK,
a yeast-based organic treatment
for dealing with cabbage moths,
I still have seven cabbages left,
and managed to freeze 18 500 mL servings
of cauliflower. We ate our broccoli as it matured,
and when I didn't pull out the rest of the plants,
they went to flower, much to the joy of local bees! 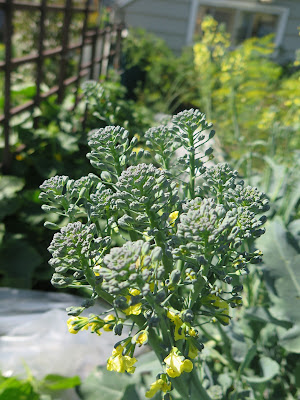 I started my onions from seed back in March,
and they've done very well -- the slugs don't like them!
We also have some really nice leeks,
even though my seed packet said 2005 on the back
and I didn't think they'd come up at all. 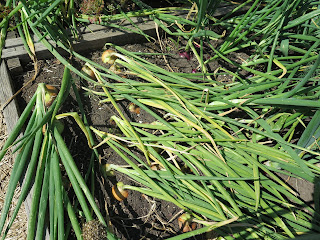 Also grew some hard neck garlic for the first time,
and it did very well. I'll be sure to plant more this fall. 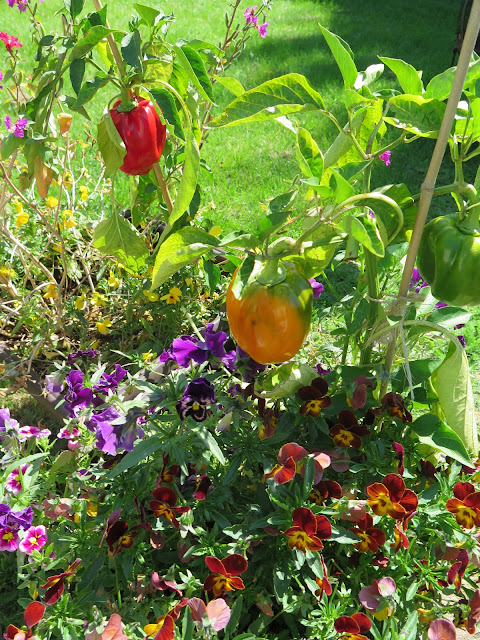 I wish I had planted more pepper and pansy pots.
(Maybe that could be turned into a tongue twister...) 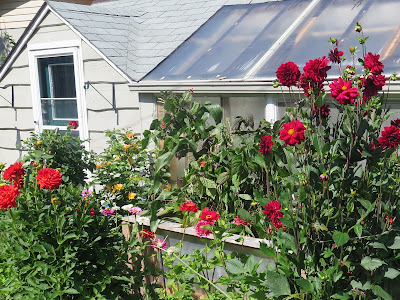 On Mother's Day weekend, Lee rebuilt our cold frame,
and as I'd already planted lettuce elsewhere,
I put the three sisters in it. We've had two lovely feeds of corn,
but, as you can see, the scarlet runner and purple peacock beans
got so heavy, they pulled the corn down!
I'm not sure what happened to the 2000-year-old squash plants,
but I'm guessing the slugs got them too, sigh. 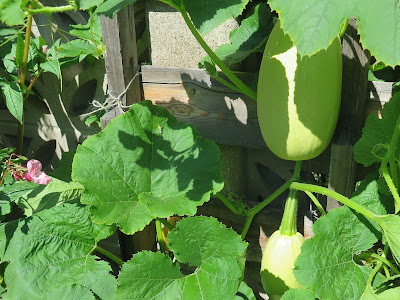 Fortunately, a few spaghetti squash have their own space elsewhere. 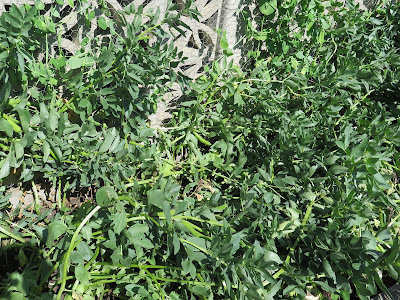 There will be lots of fava (broad) beans if it doesn't freeze too soon,
but my snow peas seem to have gotten lost in them somehow.
I had thought they'd do well climbing the walls, but they kept climbing
into the beans. Next year the snow peas will get their very own dedicated boxes.
Or maybe I'll just plant more broad beans because my family really loves them! 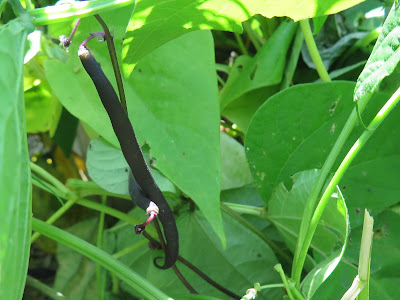 Should have taken this picture BEFORE I picked.
Our bush beans turned out really well this year
in spite of slug bites here and there. My best friend
gave me a bean mix that included Kentucky blue,
yellow wax, and these purple ones.
I love colourful produce! 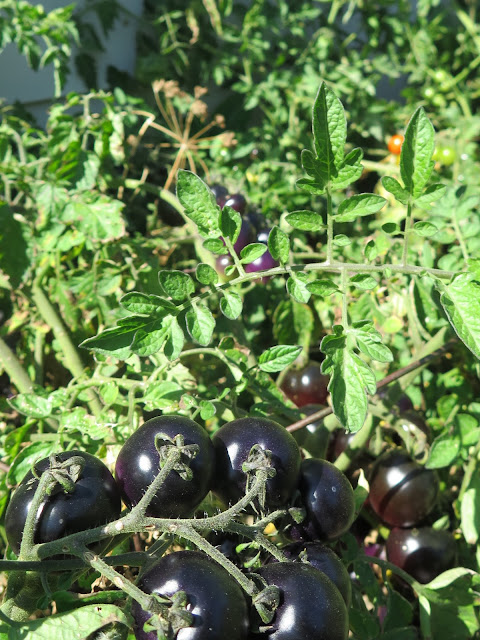 Including these black cherry tomatoes.
(Forgot to take a picture of the red and gold ones!) 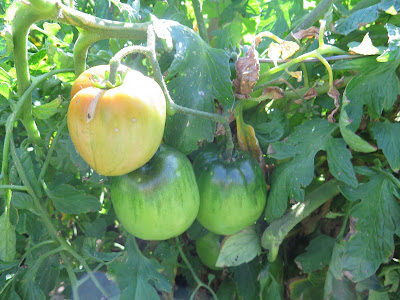 I spent a fair bit of time with my 94-year-old friend, Ralph, this summer,
and he gave me several pointers on how to grow tomatoes,
but I'm afraid I didn't listen to some of what he told me.
With our weather being so unpredictable in this era
of climate emergencies, I decided not to prune anything
so that in the event of a hailstorm, at least
some of the fruit will be sheltered by foliage. 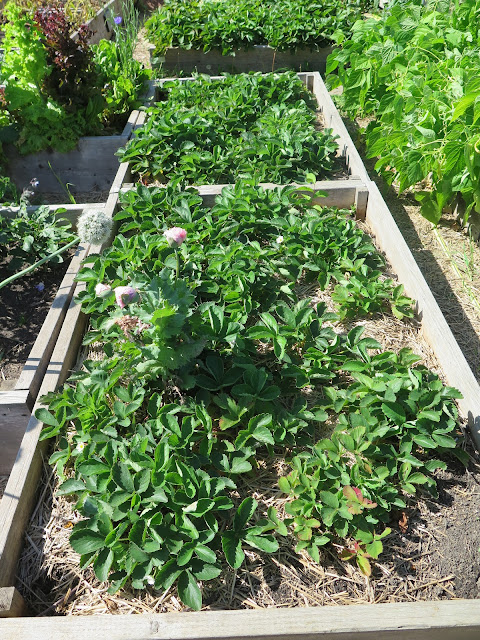 These two strawberry beds were transplanted just this spring,
and I'm delighted how well they've filled out.
I'm hoping frost will hold off, as they're flowering like mad right now,
and producing the odd humungous strawberry.
I'd also like the cucumbers to have a bit more time,
as they've been really slow thanks to the chilly weather,
and they're loaded with the possibility of pickles at the moment.
Everything has been a bit slow this year -- I've never found myself
still picking raspberries at the end of August before!

I am grateful that so much of my knowledge about gardening
has come to me from family members and friends like Ralph
Even the internet is helpful on occasion.
But I suspect more of what I know has come from trial and error.

Next year, I will definitely be doing some things differently.
But in the meantime, our freezers are filling
with good things from the back yard,
so I won't complain too much about my mistakes with our 2019 garden.
I'll just put in an order for a little more sunshine next year! 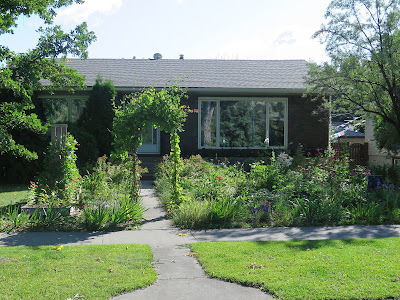