Laudato Si Sunday Reflection: On being one body

Today's reflection is brought to you by
1 Corinthians 12:12-30 and paragraphs 1-6 of
Laudato Si: On Care for Our Common Home. 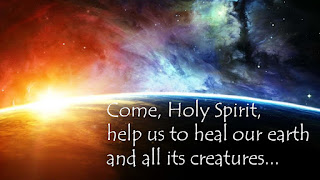 Your body, O God,
is visible in your creation,
and we are part of it.

We all drink of your spirit:
the tallest trees
to the smallest insects.

Pope Francis said
this earthly home you give us
is like "a sister with whom we share our life
and a mother who opens her arms to embrace us."

We are all part of your one body,
embraced by the great web of life
from the furthest reaches of the universe
to the ground on which we stand.

Help us to see beyond ourselves,
to the places and the creatures that we hurt
by our forgetfulness to care for ALL that you have made
through our pursuit of our own desires.

Bring us to ecological conversion
"for our good and the good of all of creation."

Please remind us,
frequently,
that your body does not consist of only human beings,
but of many other members too:
rain forests and coral reefs,
glaciers and wetlands,
bees and polar bears,
human beings and tiny aquatic life.

Help us to see
that when other members suffer
we also suffer.

Help us to think deeply
about the choices we make
so that we
may do the least harm
and the most good
for all
-- and so
honour you.

Make us aware of our place
in your one body.

Come, Holy Spirit,
help us to heal our home and all its creatures.

This is the view from the chair where I do my morning meditation. I've been praying in this room for years, but it's just in the last 8 months or so, since we rearranged our furniture, that my gaze has shifted more and more from our large picture window to the small icon cross above the doorway. 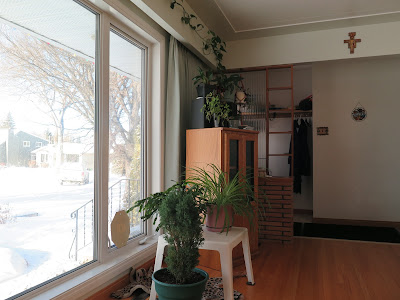 I can't remember how the cross came to me. Did I find it when volunteering at the Clothing Room of the Society of St. Vincent de Paul? It seems to me that someone thrust it into my hands as they were sorting things, saying, "Why don't you give poor Jesus a home?" The cross is very plain -- a paper icon glued to a poorly cut piece of particle board with a small wire hanger attached with tape. Its arrival in my life wasn't a memorable moment, clearly, as I can't recall exactly how it ended up where it is now. All I know is that it reminds me of the icon cross that Brother Eric of Taize wrote some years ago, though his is much simpler, with only one angel above Christ's head, Christ's mother under his right arm and St. John under his left. I love that cross.

But this cross has much more detail. 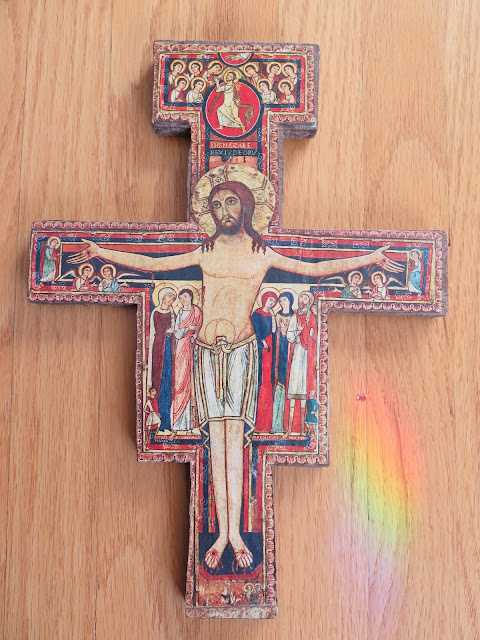 Christ is surrounded by people -- Mary, his mother, and St. John the Evangelist together under his right arm (left to my readers), with Mary Magdalene, Mary, the mother of James, and Longinus, the Roman Centurion whose servant Jesus healed (the servant looks on over Longinus' shoulder) on the other side. The small figures below these groups are the centurion who pierced Christ's side, and the one who offered him wine and vinegar on a hyssop stick. There's also the rooster who crowed three times at Peter's betrayal of Christ, and what's suspected to be a half obliterated small cat (thanks to damage to the paint), perhaps a pet of the monk who wrote the original icon early in the 12th century. They're not clear on an image this small.

Near the hands and above the head of the Crucified One are angels who are either discussing his ordeal or welcoming the Risen One in the red medallion into heaven (see the right hand of God blessing him from the half medallion above it?) At his feet are a number of saints who are difficult to identify (because of damage to the paint): Michael, Damian, Rufino, John the Baptist, Peter and Paul. Apparently, they were patrons of the region where the Christ figure who appears on this cross first asked St. Francis to "rebuild my church."

Yes, you read that right. This icon cross that has been hanging above my doorway almost unnoticed for so many years is a copy of the Cross of San Damiano, important to disciples of Christ and St. Francis fans all over the world because it called him to his vocation. It was only when I attended the showing of a documentary about St. Francis last weekend that I began to wonder about whether my little cross was connected to San Damiano's cross, or other crosses like it. This morning, I finally did a bit of research.

Readers who follow these moodlings know how much I love St. Francis, patron saint of simplicity and ecology, not to mention animals (and merchants). So you can imagine my delight to have a small version of the cross that St. Francis discovered covered with dirt in the broken down little church of San Damiano, here in my own morning meditation space. Though my memory is fuzzy regarding how it actually came to me, I am grateful for the presence of this gift that, until today, went unrecognized.

Ecumenical Prayer (with Taize chants) for 2019

It's been a crazy busy week, so I've decided to start my Laudato Si Sunday reflections next week, and post the schedule for this year's Ecumenical Prayer evenings that will be held in different churches. If you are in the Edmonton Area, don't hesitate to join us at any of the prayer evenings noted below. Each evening is a wonderful opportunity to listen to scripture, sit together in silence, and join our voices in song to celebrate all the things Christians hold in common. All are welcome! 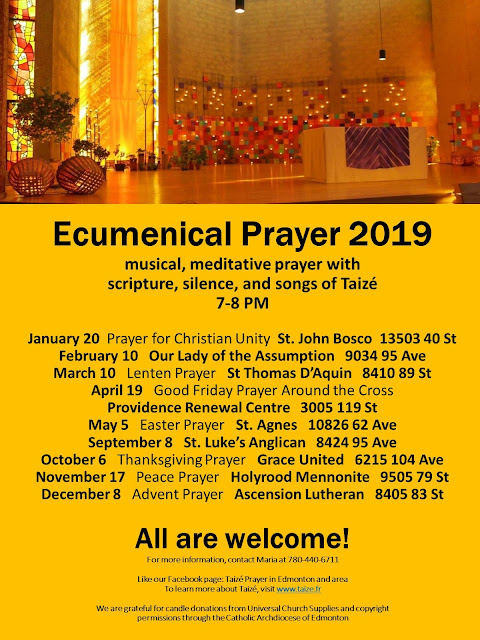 An evening with Michael McDonald

The poster below says it all...