A sense of urgency 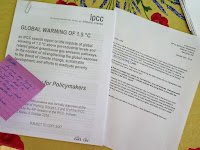 On Thanksgiving Monday, the Intergovernmental Panel on Climate Change, which is made up of a group of the world's top climate scientists, released their 6th report since 1974. It's scary, but hopeful.

And today, one year to the day before our next federal election, I finally sat down with a green highlighter pen to read a 34-page summary of it, which I then packaged up and took to the office of my member of parliament. I added a letter requesting that she do everything she possibly can to encourage the alignment of Canada's climate policies with what the scientists tell us we must do before 2030 in order to avoid more climate and human catastrophes. The document I dropped off had a lot of green text. I was just going to highlight the important parts, but it's all important!

The report came out on October 6th (click here to read it for yourself), but was shuffled to the bottom of the news cycle by most media outlets, something that makes no sense to me. We're talking about our future here, and hundreds of scientists from all over the world are in agreement, telling us that we need to make changes now or 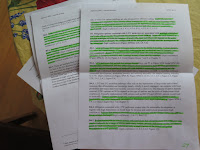 There are things we can do, and that's why this report is so important. It reminds us that it is possible to reduce CO2 emissions by lowering energy use, increasing energy efficiency, and working to implement the United Nations' Sustainable Development Goals because action on them can create synergies between countries in the areas of health, clean energy, responsible consumption and production, the health of our oceans -- and get cities and communities working together for the benefit of all.

None of this will be easy, because governments like to talk more than act. So we have to push...

All of it will require a willingness to make sacrifices and change our ways. It might start with accepting that we need to tighten our belts and pay a carbon tax to kick start an economy that relies less on fossil fuels. That we might have to drive less and walk or carpool more get by with fewer pipelines and more solar and wind energy. That we give up on those tropical vacations altogether for the sake of our grand kids' futures. And eat less meat. And waste less of the earth's resources, using what we already have until it wears out. And remember that we are not entitled to waste things, but that we are to share them, especially with those in the developing world...