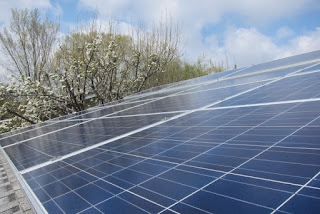 Two weeks ago, my hubby and I went on a hot date (for geeks!) -- a Solar Energy Society of Alberta evening on electric vehicles. We came away convinced that, for the sake of our planet (not to mention our wallets), we should probably sell our present vehicle and go electric. The panel of presenters were very convincing. Now we just need a car company to come up with an electric vehicle high enough to get down our back alley in the winter without getting high-centred (we actually cracked our present crossover vehicle's under-grill trying to get down our alley last winter). Our solar panels produce enough energy that we can easily power our home and an electric vehicle, so we'll get there eventually, and cut our greenhouse gas emissions by half yet again.

Lee recently wrote an update regarding our solar installation and how it's performing, along with suggestions for others who are considering their own solar power. So if you have yet to make it to an SESA event, here's our experience, as told by Lee:

I am writing this post to assist others who may be thinking about a solar electric system installation in Alberta or Canada.  It contains information about our system and actual performance over a two-year period.  I suspect others may have questions about what to consider and hence might learn from our experience.

Considerations for Installation and Design:

·       Roofing: For asphalt shingled roof installations like ours, the support stands for the panels have mounts that fit under the existing shingles.  This keeps things sealed on your roof envelop.  Before you install such a system, it is highly recommended to re-shingle your roof with long life shingles.  We chose ones with a 25 to 30 year lifespan.  Our solar electric system should last at least that long.  Replacing shingles around a solar panel installation is a major undertaking.  It is best to think ahead and delay this issue as long as you can.
·       Snow: The steeper the panels are inclined on the roof, the more likely that snow will fall off by itself during the winter.  During a sunny day, light penetrates the snow cover on the panels and warms the snow so it falls off naturally.  For Edmonton, the optimal angle to maximize solar energy collection is about 50 degrees.  To minimize wind sheer issues, panels are typically installed parallel to the roof surface for residential applications, so ideally panels should be installed on steeper roof sections.  Something to watch out for when you select the location of your panels, is don’t place them near sidewalks or other areas you typically walk under.  You may have a sudden icy surprise on your head as the panels shed snow or find a slippery section on your sidewalk that is difficult to keep ice free.
·       Electrical: These systems use direct current near the panels which is converted to alternating current that can be used in your house.  Engaging a qualified electrician is highly recommended due to inherent dangers (shock and fire) during and after improper installation.  Another consideration is to check your electrical panel before installation.  We had enough spare capacity to connect the system, but some houses may not.  An electrical panel upgrade can be expensive.
·       Protection from Rodents and Leaves: Our system’s panels are raised slightly above our roof to allow for airflow.  To protect against gnawing rodents (they apparently enjoy chewing through cables) and leaves and other build up, a protective mesh was installed around the bottom of our panels along the roof line.
·       Rebates: Check if rebates for solar installations are available in your community or province.  They can make a significant difference for your installation costs (saving you thousands) and reduce the payback period for your system.
·       Electrical Maintenance: Photovoltaic (PV) systems are relatively low maintenance and worry-free – almost.  One of the microinverters was defective and failed in October 2016 and this was not noticed by us and repaired until April 2017.  As a result, the electrical generation performance for part of 2016 and early 2017 is slightly lower than would have been expected (~1/12th loss).  From a practical perspective:
o   I recommend that you check system performance from month-to-month.  Our  microinverter manufacturer has a website that shows individual panel performance.  It is fascinating to watch as your panels produce electricity throughout the day and it also makes detecting issues very easy provided you check for them periodically.  An email alert for system failures would be a nice feature… in case any manufacturers are reading this post.
o   As electronics for these systems can fail earlier than expected, it is a good idea to get a warranty.  It is worth the peace of mind.
o   When you pick an installation company, remember that ongoing service should be a consideration.  When the occasional malfunction occurs, it is nice to know you can rely on the installing company to perform the needed service.  The one we chose came and fixed things quickly once we noticed the outage.
·       Other Maintenance:
o   Washing: Keep an eye out for dust and other build up on the panels.  Dust, bird droppings and other build up can reduce system capacity.  Washing them gently with water from time to time should be considered.
o   Trees and other shadowing: When we installed our system, I trimmed the top of a tree next to the system to reduce the amount of shadowing during later afternoon.  It is time to do this again.

o   Electric Cars: When we installed our system, we purposefully built it so we could add extra capacity for an electric vehicle in the future.  Our installation company recommended at least 8kW for a combined home/car system.  Cable sizing and placement, physical space for additional panels and electrical panel capacity are key considerations.
o   Battery Backup: Our system is a grid-connected configuration.  This is apparently the most common type of system installed today.  When it does not detect an energized electrical grid, the inverters do not produce electricity.  This avoids feeding electricity into a de-energized electrical grid during an outage and potentially putting your local utility workers in harms way.  This has two implications: 1) the system will not provide backup electricity during an electrical outage, and 2) if a battery backup system is installed for such a scenario, it needs to be disconnected from the electrical grid during an outage and / or allow for solar recharging of batteries in a disconnected situation.  A local Alberta company, Eguana Technologies, seems to have a system that will work for this situation.  This is an area I am still investigating and would be interested in the experience of others.

·       Time of year and snow does make a difference for electrical generation.  Don’t expect too much electricity generation in the months of December and January.  The sun is just too low in the sky to generate very much.  I tried to remove snow from the panels in December but saw limited electrical generation.  Even 6 inches (15 cm) of snow pretty much stopped the panels from working.  In the shoulder months of November and February, the amount of electrical generation increased appreciably when temperatures rose sufficiently for the panels to shed their snow load by themselves.
·       Total Yearly Solar Electric Generation:
o   Year one (June 2016 to May 2017): 5824 kWh (see note above about failed inverter)
o   Year two (June 2017 to June 2018): 6023 kWh


·       Generation Pattern - The following chart shows how much electricity was generated by our system at various times of the year from June 2016 to May 2018. 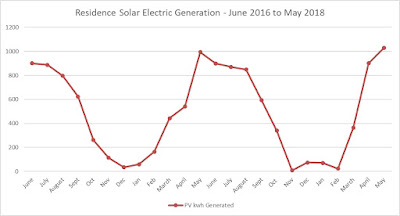 (Maria's note: We don't have to think too much about our solar panels. They do their work, we do ours, and it's all good, especially because we're not contributing more than we have to when it comes to greenhouse gases. We think solar is a great way to go!)
Posted by Maria K. at 9:00 AM