I've never been a huge fan of re-runs, and I promise I won't be recycling my ideas very often in this space. But now that winter has definitely arrived where I live, I'm thinking it's probably a good idea to re-moodle about winter composting, seeing as I sort of missed the boat last year by posting Simple Suggestion #112 in mid-February, when winter was on the decline. Winter composting isn't any more work than composting the rest of the year, really. In fact, it's probably less work, because if you can put your organic waste outside in a cold climate, you don't really have to do the work until spring! What follows is a re-run, but one worth considering:

I really should have moodled about this back in October, but didn't think of it until a few weeks ago, because of a conversation with my neighbour. He was cutting my hair, and he mentioned that he had saved a few bags of autumn leaves for me and my composting efforts. We got into a discussion about how I planned to add them to my compost pile because composting actually requires five to twenty times more "browns" (carbon material like dry leaves) than "greens" (higher nitrogen kitchen peelings, etc.), and he said, "but you won't be composting until spring, will you?"

He was very surprised when I started talking about winter composting, because he didn't realize it could be done. I explained that in our cold climate it's just fine to toss our kitchen scraps out on the compost pile because they usually just freeze solid until spring. 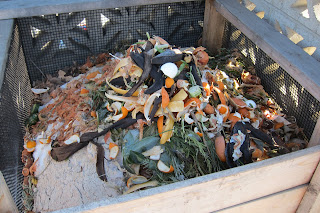 If the pile starts to get a bit smelly as it melts, I just add leaves on top as a bit of a "fragrance filter," but it's not usually an issue before it really warms up and I have a chance to get out and start stirring more leaves into the mess. 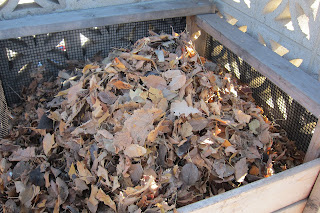 I also told my neighbour about folks I know who keep a plastic-lined garbage can near their back doors for fruit and veggie scraps. 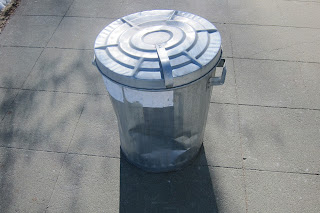 They just keep piling the scraps in there through the winter, and in the spring they have a soupy mess to pour into their compost bin with leaves and other fall yard waste. The freezing and thawing actually makes the kitchen waste break down more quickly, and they get compost a lot sooner. My neighbour sounded interested in trying his own winter composting, so I might not get my bags of leaves from him in the spring. But that's okay. I'm a leaf thief, and I have lots stored up already... 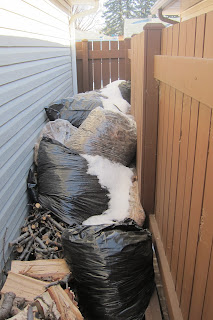 For unsqueamish people, there's also another way to winter compost, involving a few friends imported from the Carolinas. In our basement, we have a condominium for red wiggler worms, all very neat and well contained. 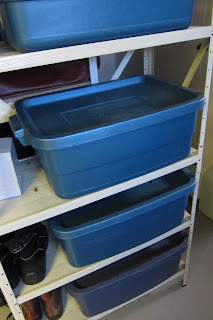 Most of the time, we forget they're there, but every couple of weeks, they're happy to receive our kitchen waste, and they turn it into the best compost you can imagine. They don't require a lot of effort, and they're not even that gross! 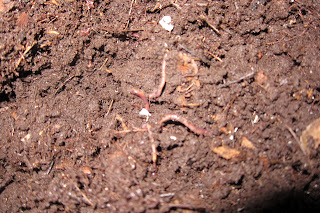 I spent a little time with them this afternoon, giving them carrot peel and kiwi skin snacks to keep them happy. I line the bins up in a row, make a little space for the kitchen scraps, and cover them over with compost again. Voila, waste taken care of in a couple of weeks by hungry red wigglers. 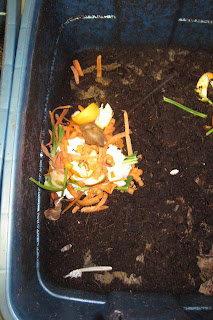 Before I put the lids back on the worm bins, I always tuck them in with a sheet of newspaper. That way, if there are any fruit flies among my banana peels, their life cycle is cut short because they can't get past the newspaper. Works like magic! The far bin is already tucked in, as you can see. 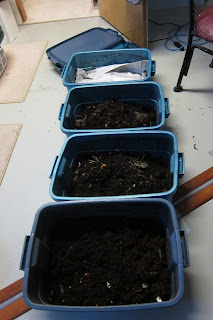 Those are my two ways to compost during the winter. In the spring, my garden benefits from all the work my composter and red wigglers have done over the winter... and during the winter, my houseplants are happy when I put a bit of vermicompost into their drinking water (1 tbsp/litre). It's like a vitamin booster for plants.

Soil gives us so much fantastic food... and composting, winter and summer, is my way to give something back so good things can keep growing.

Hi - really enjoyed your posting. Thanks for the tip about the newspaper & fruit flies!

I can't take credit for that tip. Another Master Composter/Recycler whose name I can't remember suggested it to me!

hi! I just stumbled across your post. Would love to set up something similar. I noticed you do not have anything underneath the bins to catch excess moisture. Do the worms receive enough oxygen?

When I add compostable materials, if the bin contents seem too wet, I also add leaves or newspaper to absorb moisture. The worms seem to hang out in the upper layers if the bottom is wet, so yes, I think they're breathing just fine...